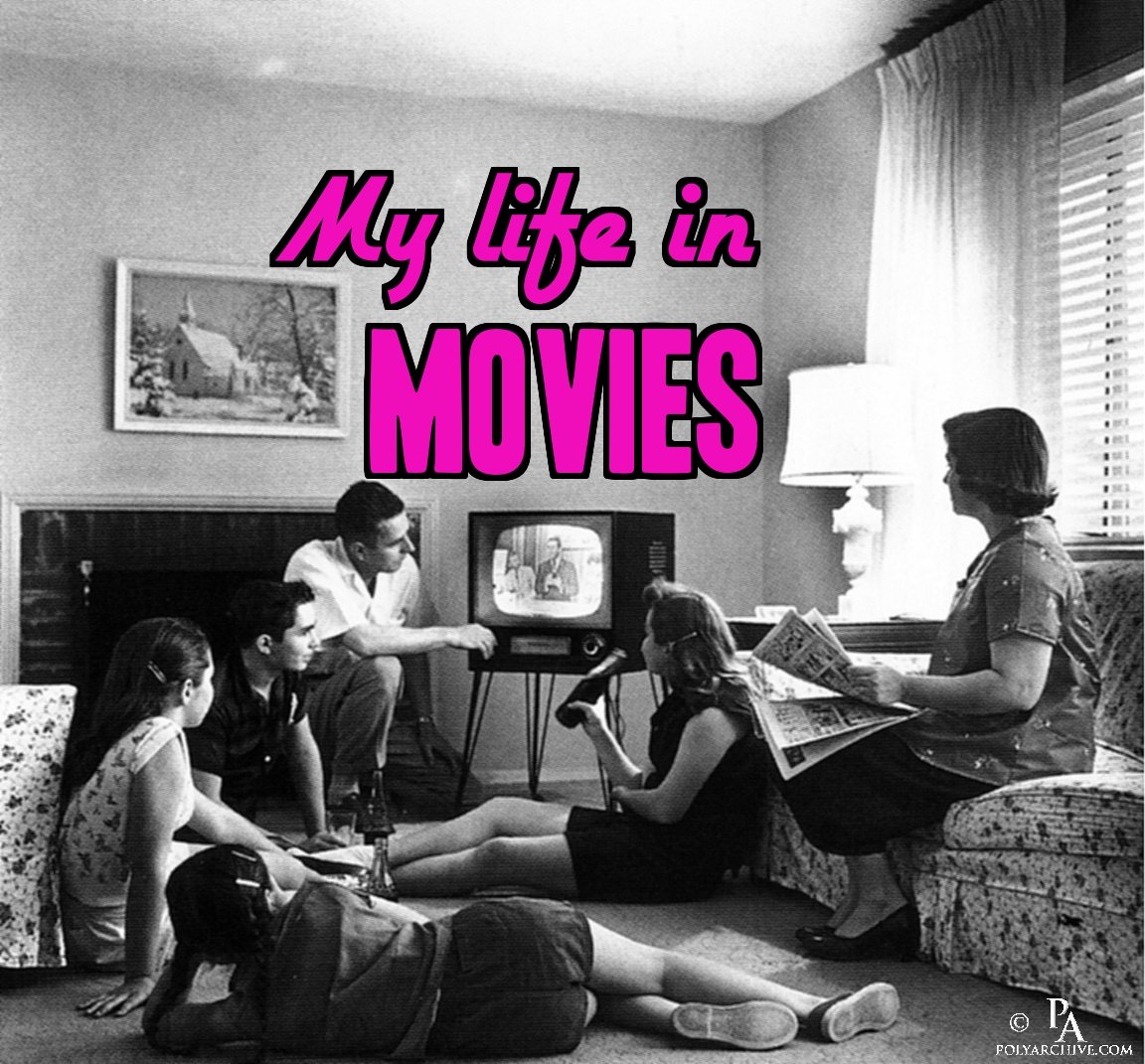 Movie my brothers got taken to see while my mother was giving birth to me:
Return of the Jedi

First movie I can remember seeing in a theater (the library screening room, IIRC):
The Fox and the Hound

Movie I fiercely fought back tears at, because I was a tough girl at the ripe old age of 6:
All Dogs Go to Heaven

Movies that, embarrassingly, can always make me cry:
Hardball
Tomorrow Is Forever

Movies I can quote every single line of dialogue to because we rented them repeatedly and/or taped them off TV:
Follow that Bird
Robin Hood
National Velvet
The Little Mermaid
Bon Voyage, Charlie Brown
What About Bob?

Movie we got to watch if it rained at recess:
The Neverending Story 2

Movies that my childhood best friend would watch only certain scenes of, over and over:
The Wizard of Oz (flying monkeys)
Return of the Jedi (Ewoks dancing)
Meet Me in St Louis (throwing flour in people’s faces)

Movies that were always on HBO when we would get the free trial:
WarGames
Rain Man

Movies that my family members quoted until the lines lost all meaning:
Rain Man
Dirty Rotten Scoundrels
Sling Blade
This one terrible TV movie about Charles and Diana’s divorce that sells for a small fortune Stateside

Movie my parents bought because the dog liked to watch it, even though no one else did:
Snow Dogs

Movies that informed my notions of romantic relationships:
The Cutting Edge
Wild Hearts Can’t Be Broken
A Far Off Place
The Bodyguard

Movies I watched chiefly because of the attractiveness of the actors therein, a la Tina Belcher:
Christian Bale dancing
Christian Bale living next door
Cute boys on a boat
Handsome guys cheating at baseball
That one where Bon Jovi is on a submarine with Matthew McConaughey

Movies that made me feel smart as a nerdy teen:
Contact
The Truman Show
Romeo + Juliet
Gattaca
10 Things I Hate About You

Movies I was so desperate to see I bought illegal, edited DVDs:
Garden State
Love Actually

Movies that shaped my sense of style and aesthetics, to the present day:
Singles
Clueless
Troop Beverly Hills
Breakfast at Tiffany’s

Movies I have watched way, way, way too many times:
Breakfast at Tiffany’s
Citizen Kane
Casablanca
Pride and Prejudice (1995)
Hot Rod
The Saint

Movie I slept through in a theater:
Fantastic 4: Rise of the Silver Surfer

Sequels I’ve seen without having seen the first film:
Fantastic 4: Rise of the Silver Surfer (well, sort of. I fell asleep in the theater.)
Toy Story 2
The Incredibles 2 (in Russian no less)
Ocean’s 12
Return to the Blue Lagoon

Indie movie I saw on an early date with my husband:
Children Of Invention

Movies my husband made me watch before we could get engaged:
Star Wars
The Empire Strikes Back
Return of the Jedi
Those other three ones

Movies I made my husband watch after he put a ring on it:
Roger & Me
Hot Rod
Escanaba in Da Moonlight
Love Actually (see above)
Glitter

Movies I don’t understand why everyone loves:
The Goonies
The Notebook
E.T.

Movies I didn’t see until later in life and now regret all those years not knowing:
Soul Man
Heathers
In the Mood for Love

Movie I have no intention of ever seeing:
Titanic

Movies my husband and I quote most often to each other:
Summer Catch
Varsity Blues (this)
School Of Rock (this)
Bring It On
Eddie and the Cruisers II: Eddie Lives!
The Other Sister
The Saint

Possibly the best gift I have ever received:
Eddie and the Cruisers parts 1 & 2 DVD set

Movie I watched once in the middle of the night and told everyone was awesome for the next decade and then rewatched and was so embarrassed:
Thank God It’s Friday

Movie I’ve seen the first 15 minutes of, over and over, on an overseas flight:
V for Vendetta

Movies I will sit down and watch every time they’re on TV regardless of how many times I’ve seen them/how good or bad they are:
Happy Gilmore
Tommy Boy
The Breakfast Club
Sleepless in Seattle
A Few Good Men
Dumb and Dumber
Office Space

Movies I think are dumb but I will hate-watch if I am in the right mood and have a potent potable:
The Jane Austen Book Club
Runaway Bride
The Last Song
The Lincoln Lawyer
Blue Crush

Movies I hate so much I can’t speak about them coherently for very long without just starting to make noises:
Garden State
Emma (1996)
Dan In Real Life
The Village

Movies in which I root for the “bad guy”:
The Sound of Music (Baroness Shraeder is awesome.)
Return of the Jedi (The Emperor)
Swing Kids (Christian Bale, that is, not, you know, Hitler)
Armageddon (the asteroid)

Movie I should have seen in a theater:
The Perfect Storm

Last movie I saw in the theater:
Austenland

Next movie I will see in a theater:
Casablanca, if I can drag the mister

We use cookies on our website to give you the most relevant experience by remembering your preferences and repeat visits. By clicking “Accept”, you consent to the use of ALL the cookies.
Do not sell my personal information.
Cookie SettingsAccept
Manage consent

This website uses cookies to improve your experience while you navigate through the website. Out of these, the cookies that are categorized as necessary are stored on your browser as they are essential for the working of basic functionalities of the website. We also use third-party cookies that help us analyze and understand how you use this website. These cookies will be stored in your browser only with your consent. You also have the option to opt-out of these cookies. But opting out of some of these cookies may affect your browsing experience.
Necessary Always Enabled
Necessary cookies are absolutely essential for the website to function properly. These cookies ensure basic functionalities and security features of the website, anonymously.
Functional
Functional cookies help to perform certain functionalities like sharing the content of the website on social media platforms, collect feedbacks, and other third-party features.
Performance
Performance cookies are used to understand and analyze the key performance indexes of the website which helps in delivering a better user experience for the visitors.
Analytics
Analytical cookies are used to understand how visitors interact with the website. These cookies help provide information on metrics the number of visitors, bounce rate, traffic source, etc.
Advertisement
Advertisement cookies are used to provide visitors with relevant ads and marketing campaigns. These cookies track visitors across websites and collect information to provide customized ads.
Others
Other uncategorized cookies are those that are being analyzed and have not been classified into a category as yet.
SAVE & ACCEPT
Loading Comments...